In defence of not reading

After having seen unusual snow in Tucson and the Grand Canyon, we decided to have a white Christmas in the Colorado Rockies. Activities were basically toboganning in Hawaiian costume, climbing a nearby mountain peak and celebrating Christmas. 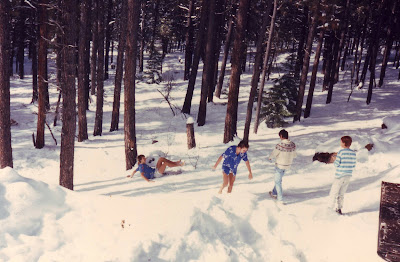 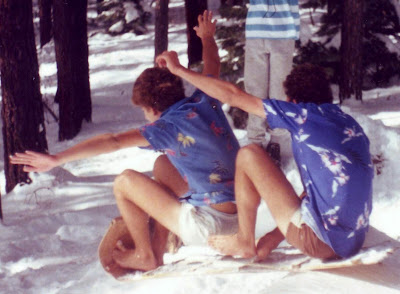 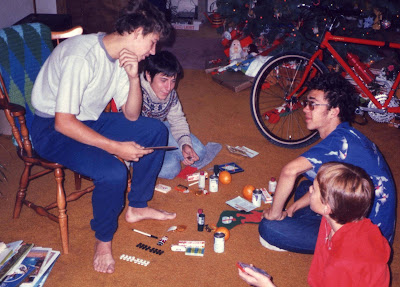 Posted by Marco Parigi at 1:52 pm No comments:

Mexico December 16th to 22nd? 1987. My entry document indicates that we entered Mexico on the 16th. I recall that we stayed several days in Mexico, but we went to Colorado for Christmas. The order of the pictures in the album suggests we went to the Grand Canyon after Mexico, but that seems a litle too close to Christmas by my reckoning. I remember catching a train to Guaymas, hiking a lot, sleeping in the rain on an island near Club Med, nearly missing our vital train trip back, jumping onto the moving train with luggage, being searched on our way back to the US. 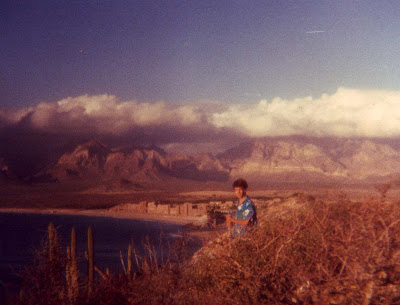 The Groose with club Med in the background 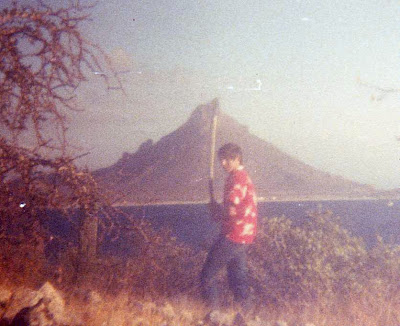 Me with "Tetas de Capra" (Goats' teats) mountains in background. 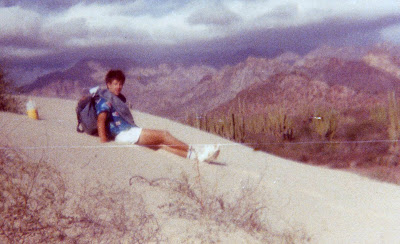 On A sand dune with Cacti in backdrop
Posted by Marco Parigi at 2:43 pm No comments:

Email ThisBlogThis!Share to TwitterShare to FacebookShare to Pinterest
Labels: 1987, Mexico

4th December to 15th December 1987. After one day living it up in LA and visiting Universal studios, we catch an overnight bus to Tucson Az. minus our luggage for a day and minus our tape recorder forever. Activities included golf, mountain climbing, the occasional party, pictionary, bowling, shopping (eg. boots, sleeping bag, mini-camera) trip to Grand Canyon - see pictures. I have a document that tells me we entered Mexico on the 16th of December. I remember staying about 5 days??? Anyhow, I've relegated Mexico to a separate leg of the adventure. 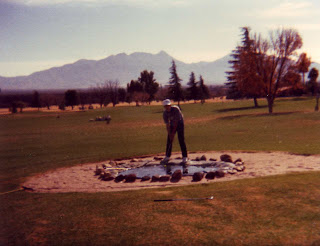 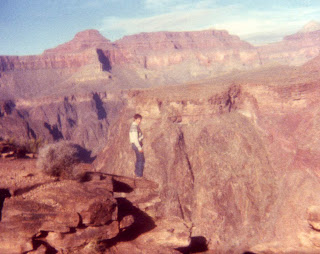 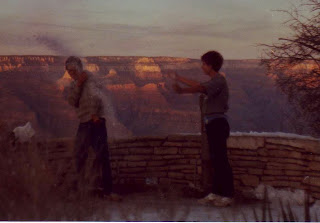 Posted by Marco Parigi at 4:02 pm No comments:

Email ThisBlogThis!Share to TwitterShare to FacebookShare to Pinterest
Labels: 1987, Arizona

From the movie "Brassed Off" .Townsville Brass actually played this at our last contest, and we have a young female Flugel Horn player and an older baldy conductor like this clip. We are playing it again at a concert on the strand "Brass on the Grass" Sunday 11th November.

Posted by Marco Parigi at 9:31 pm No comments:

I don't remember pakalolo plantations, but so very much in such a little time- sheltering from a downpour in a Hilo high school- overnight at the Volcano visitors centre- the day we made money, picking up change along a highway through a desolate moonscape- camping on a picnic table at a haunted beach of black and white pebbles- begging for water- eating guavas off the vine- trying to find the Captain Cook monument- the cops coming to see if we were dead, camped outside a church on the edge of Kailua-Kona - then the best ever hitched ride, warned of the sheriff in Honokaa (or was it Ho'okena?, most memorable ever hitched ride passing trucks on double white lines on twisty mountain road with watefalls sitting with the dogs in a ute with no sides... trying to peer through the windows of the Miss Teen USA competition and the drug dealer who was the only person who *didn't* offer us pakalolo... 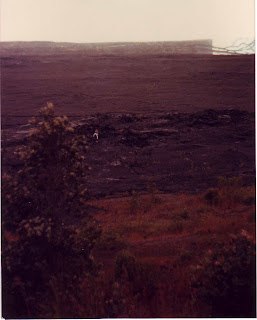 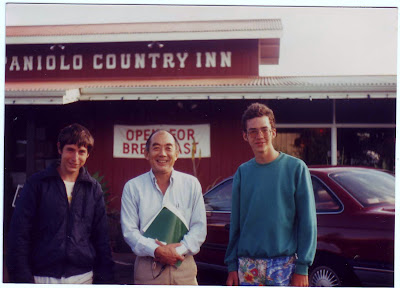 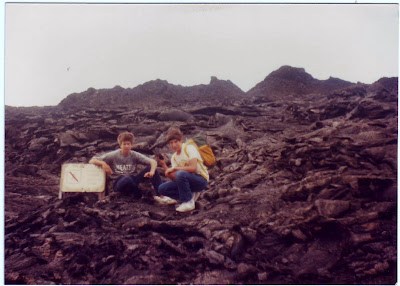 Reminiscing about 20 years ago reminds me about 18 years ago today. In fact I believe three young tourists were instrumental in generating momentum in 1988 that culminated in the wall coming down. I believe I said to some German "Ich bin Ein Hamburger" - you see we couldn't get into Berlin so we had to make do with Hamburg, and that's why it took so long for the message to get through to the border guards.
Posted by Marco Parigi at 10:32 am No comments:

Email ThisBlogThis!Share to TwitterShare to FacebookShare to Pinterest
Labels: Schicksalstag 9/11

I have been reading The Panda's Thumb and there is a nice chapter devoted to the discussion of Lamarckism. Essentially the tenets of "Lamarckism" is that evolution can be "directed" by environmental factors, rather than by undirected genetic variation being winnowed out by death or lower reproduction rates of fellow individuals of the species allowing the remaining individuals to pass on genes appropriate to the environmental factors. Lamarckism has been rejected by biologists because "Darwinism" explains all facets of evolution satisfactorily, and no direct evidence of Lamarckism has been discovered, as well as the fact that particular examples (giraffe necks etc.) oft quoted have been discredited as being both explainable by darwinism and having no measurable direct evidence of directed genetic change.

A new approach would be to look at it from a completely different angle as follows. If Lamarckism is a force in evolution, what are the best genetic strategies to follow given a pre-reproductive youth to experiment on what genes are useful and which not. The issue to me is that genes would have to predict what future environments will require. Genetic variation would hedge its bets on an environmental change being a temporary or permanent one. I would suggest that modern controlled experiments on a range of different animals over a large number of generations would demonstrate it. Essentially, almost no experiments have been done since the 1920's and 1930's. With a greater understanding of the complex role of RNA, more nuanced experiments, I believe would find a subtle but pervasive pathway for some direct/accelerated forms of evolution.

Neither the rat/maze learning experiments and antenna/amputation/regrowth experiments have natural environmental analogies, making them less explanatory than they appear. Direct adaptation would only happen where similar changes in environment had happened before in the distant ancestral history of the animal/plant in question. After all, the specific Lamarckian adaptation itself would have to evolve to suit probable dramatic shifts in environment (ie. selection pressures on species that had no Lamarckian adaptation vs species that did)

One particular experiment would be subjecting specimens to permanent darkness. It is a well known evolutionary theme that vision in a large range of beasts becomes impaired when adapted to permanent darkness. It also has reasonably common natural analogy where animals adapted to light have close relatives adapted to dark with common ancestry. Adaptation to permanently, cold, wet, hot or dry are similarly common natural events that lab experiments could weed out direct vs undirected variation.
Posted by Marco Parigi at 4:10 pm 4 comments:

In the first few days of our 1987 trip, we hung out around Honolulu trying to make nuisances of ourselves. We had a tape recorder but nothing too interesting got recorded other than being thrown out of a hotel for wearing shorts. We didn't steal any cars but we did pretend to own them. 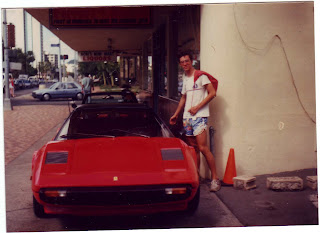 What I didn't realise was that the hotel we stayed at - the Edgewater Hotel - was a historic building. Some info From link Waikiki Beach Walk builds on Outrigger's deep history in the area. The 184-room Edgewater Hotel -- which opened in 1951 and is at the heart of the new Waikiki Beach Walk complex -- was the second hotel built by company founders Roy and Estelle Kelley, and for years was the only major building in that area of Waikiki. (The Kelleys' first hotel, the Islander, was built in 1947 on the site of the former Waikiki I and II Theaters and has long since been demolished.) The Edgewater Hotel was the first hotel in Waikiki to have an automatic elevator and a swimming pool, and it set the standard for Outrigger's growth in Waikiki in the succeeding decades, meeting the needs of generations of travelers seeking moderately priced rooms in Waikiki. 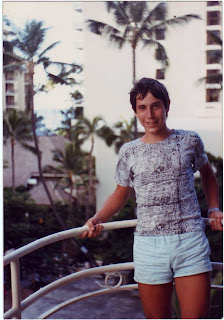 Picture of me at the Edgewater Hotel.

and this link explaining some more of the history of the place.

linkOutrigger Hotels had a large investment in the area, including its once landmark Edgewater Hotel. Built in 1951, in the burst of postwar optimism that anticipated as many as 50,000 Waikiki visitors a year, it was the first Waikiki hotel with an automatic elevator and a swimming pool. John Wayne, who often stayed there, once locked himself out of his room naked, and had to be rescued by the owner himself. John Wayne should have just climbed down :)

Thanks for the links .... I'll checkem out when I have some more time. At the moment Carleah and I are living it up in China. It's great. We can get a restaurant meal including drinks for 3 people for the pricey sum of $7.... an expensive taxi ride is $3.

I'll be celebrating our 20year anniversary on the 25th November in Korea :-) 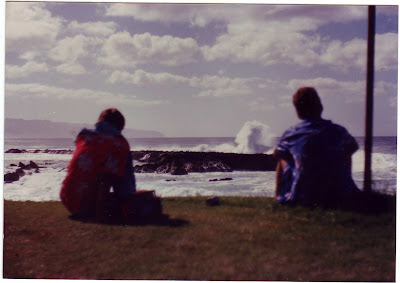 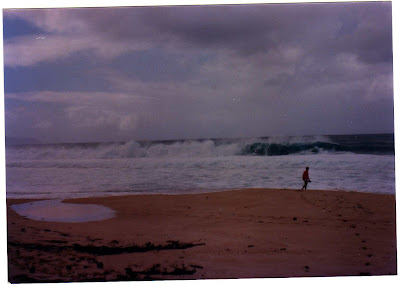 Waves are deemed too big for the surfing championships being held on Sunset Beach - so we go in for a swim at Waimea Bay
Posted by Marco Parigi at 2:24 pm 4 comments:

You were allowed to go to Schoolies weren't you?

This is a question that Belinda put to me recently when I made obvious my loathing of the organised activities of youngsters at the end of grade 12. My initial reaction was that "Schoolies" didn't exist when I finished high school. But then I thought about it and I really have no idea what status "schoolies" had back in 1987. To tell you the truth when I did think back to what I actually did in the week after school finished, I am not sure I should bring up the details with my kids, lest they think it ok to act irresponsible and stuff.
Posted by Marco Parigi at 2:16 pm 5 comments: