As suggested in a recent peer reviewed paper:
http://www.nature.com/nature/journal/v534/n7607/full/nature17670.html
Hirabayashi et al
Stresses due to "rocking" of the lobes of 67P are likely to cause "fission" - that is a complete separation of the two lobes, but then "reconfiguration" of the two lobes due to their relative velocity being less than escape velocity.
What hasn't yet been considered is that at an instantaneous level, this process is happening repeatedly already! The fractures are causing the two lobes to instantaneously act as separate bodies. Internal frictional forces only then come into play and have a rebalancing effect. The rebalancing is effected by an exchange of angular momentum as the lobes rock relative to each other. Instantaneously fluidised material near the core of the nucleus is attracted outwards by the gravity of the closest lobe rather than the centre of gravity of the entire nucleus. The net effect of this stepwise recombinant fission is that the centres of gravity of the individual lobes move slightly further apart. While the outgassing of the comet is speeding the rotation considerably, the recombinant fission  is effecting a slight braking manoeuvre due to the conservation of angular momentum.
Friction has the dual effect of damping the precession, and rebalancing the lobes on the neck, a little like a spinning top keeps upright if it can keep spinning. A spinning top has the disadvantage of not having jet "propulsion" and the friction eventually slows a top down to a speed that topples it, while the comet nucleus has a net propulsive torque that keeps the neck balanced even as it gets skinnier due to repeated recombinant fission.
The changes I have found on Anuket are the surface evidence that this recombinant fission is ongoing. The other points of evidence are that there is no torque free precession - implying the damping necessary is evident. 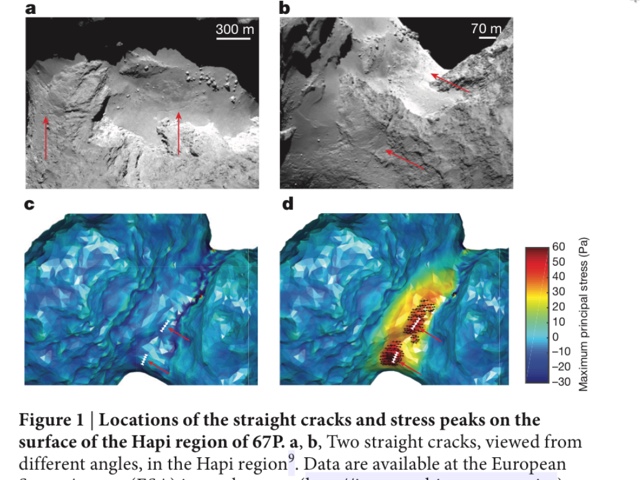 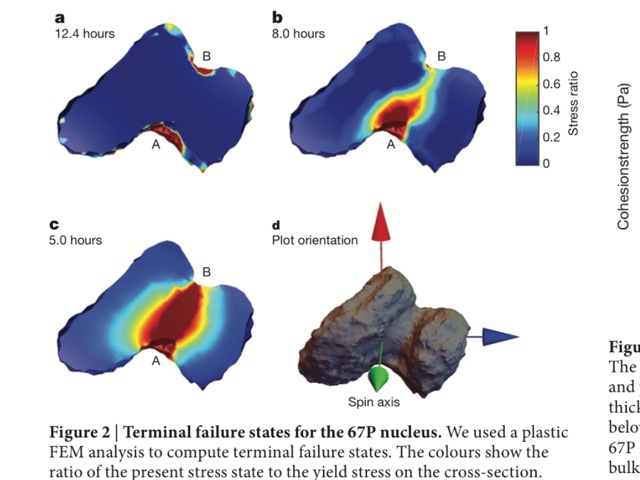 Posted by Marco Parigi at 9:05 am No comments: